CDC guidelines prevent our association from holding in person meetings, but the work to enhance these sacred grounds continues!

The POW/MIA monument stands as a means to educate the public about Prisoner of War and Missing in Action service members.  Photos for the front of the remaining 7 tablets are currently in the design process.  We hope for delivery by Armed Forces Day, May 15, 2021.

We continue to fundraise for additional projects and our eyes are currently focused on the Committal Shelter.  The original design proved problematic in some of Maine’s unforgiving weather.  Our goal is to refurbish the structure and to create a more usable space for families to comfortably hold services,  protected from the elements in all seasons.   As always, we appreciate your support.

Bathrooms in the administration building are open during cemetery hours.

We understand that we are all living during a time of extremes. Social distancing is our best defense against the spreading of COVID 19, but our lives go on, we need to keep connecting in one way or another. Social media allows us to maintain social distance without feeling isolated. We are happy to share some photos of the progress on our POW/MIA monument. We thank Collette Monuments for their hard work and we thank all of our generous donors and supporters of this project. Stay strong and stay healthy. 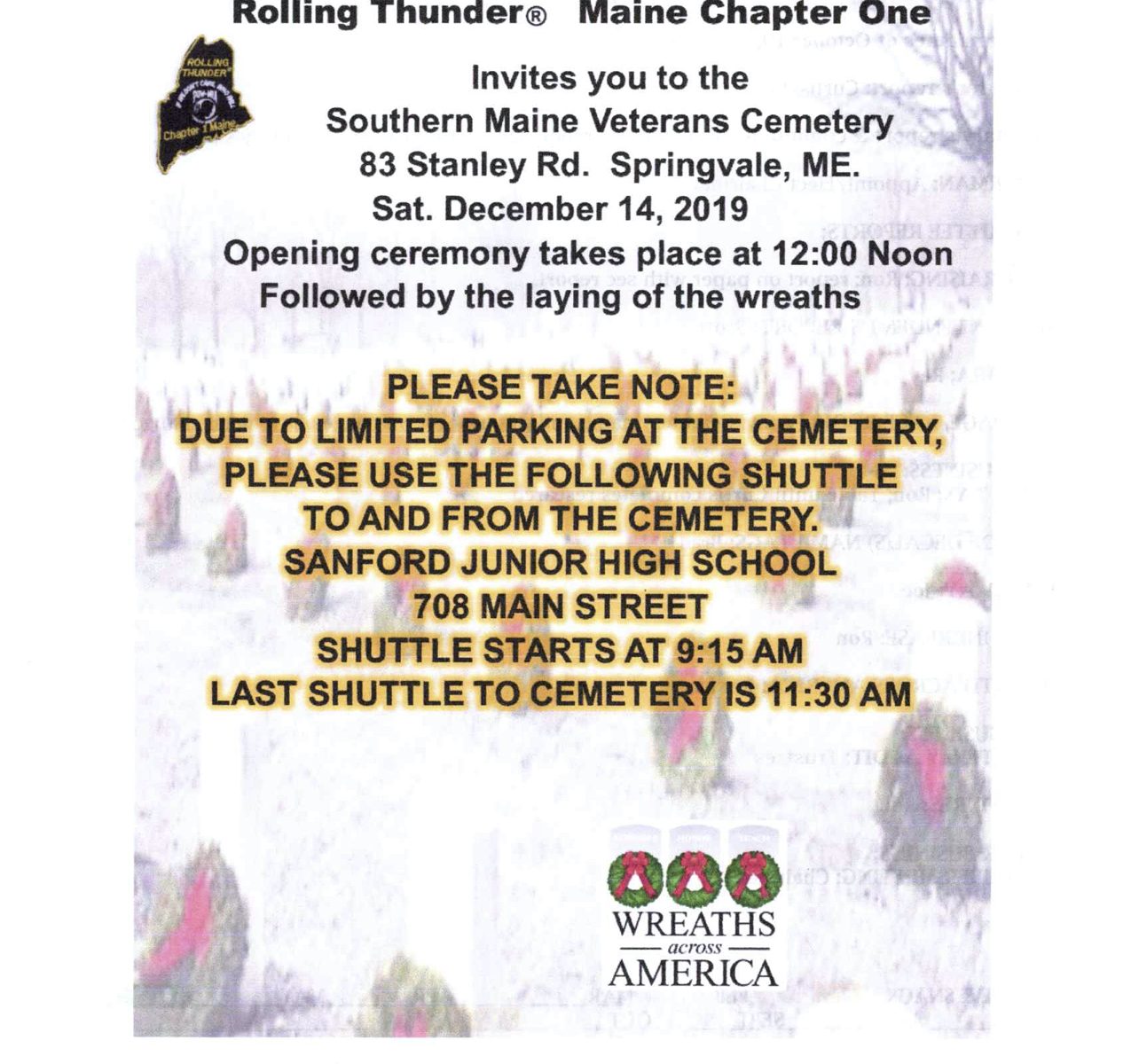 Wreaths Across America takes place on Saturday, December 14, at 12:00. Parking at the cemetery is VERY limited in the winter. Ample parking is available at Sanford Junior High School and frequent shuttles will be provided.

This is a family event, but please remind your children that the cemetery is a place of reverence and respect, not a playground. No running or playing on or around grave markers. This link offers educational information about the the symbolic meaning behind the gift of a wreath that you might like to share with your child.
https://wreathsblob.blob.core.windows.net/…/remember-honor-…

Please dress accordingly, Maine’s winter weather might make you wish this was an indoor event. Sorry, it’s not. The Administration building will be open for those who need to access the restroom.

Please leave your pets at home. The Veterans Cemetery follows the U.S. Department of Justice’s ADA requirements for service animals: THE SERVICE ANIMAL MUST BE TRAINED TO PROVIDE ASSISTANCE TO A PERSON WITH A DISABILITY. It is our goal to ensure access to all visitors in accordance to Title 32 Code of Federal Regulations Part 553, which prohibits pets in the cemetery except for service animals.

Veterans’ Day, November 11, 2018, marked the 100th anniversary of the end of WWI. In 1914, British writer, H.G. Wells (1866–1946) wrote, “This is now a war for peace. It aims straight at disarmament. It aims at a settlement that shall stop this sort of thing for ever. Every soldier who fights against Germany now is a crusader against war. This, the greatest of all wars, is not just another war—it is the last war!”

While his views proved idealistic, H.G. Wells was an influential writer and when the London Times published his, “The War that will end wars,” in 1914, his essay helped charge the Allied Forces to give their all in the fight against the Central Forces.

In 1914, Lieutenant Colonel John McCrae, MD was a first hand witness to the war’s horrific battlefields, to countless wounds of battle, and to the deep pain of loss. He wrote In Flanders Field, a poem that was first published in December 1915. His poem’s imagery depicts the reality of war in the life, the death, and ultimate sense of duty of a WWI soldier. In 1924, the US war department reported that there were more than 35 million documented casualties from this war.

SMVMCA’s vision for the memorial stemmed from an idea for a poppy garden, influenced by Lieutenant Colonel John McCrae, MD’s In Flanders Field. With the help of some ambitious students from Sanford High School and from Sanford Regional Technical Center, the plan for a modest poppy garden has blossomed into a respectable monument. 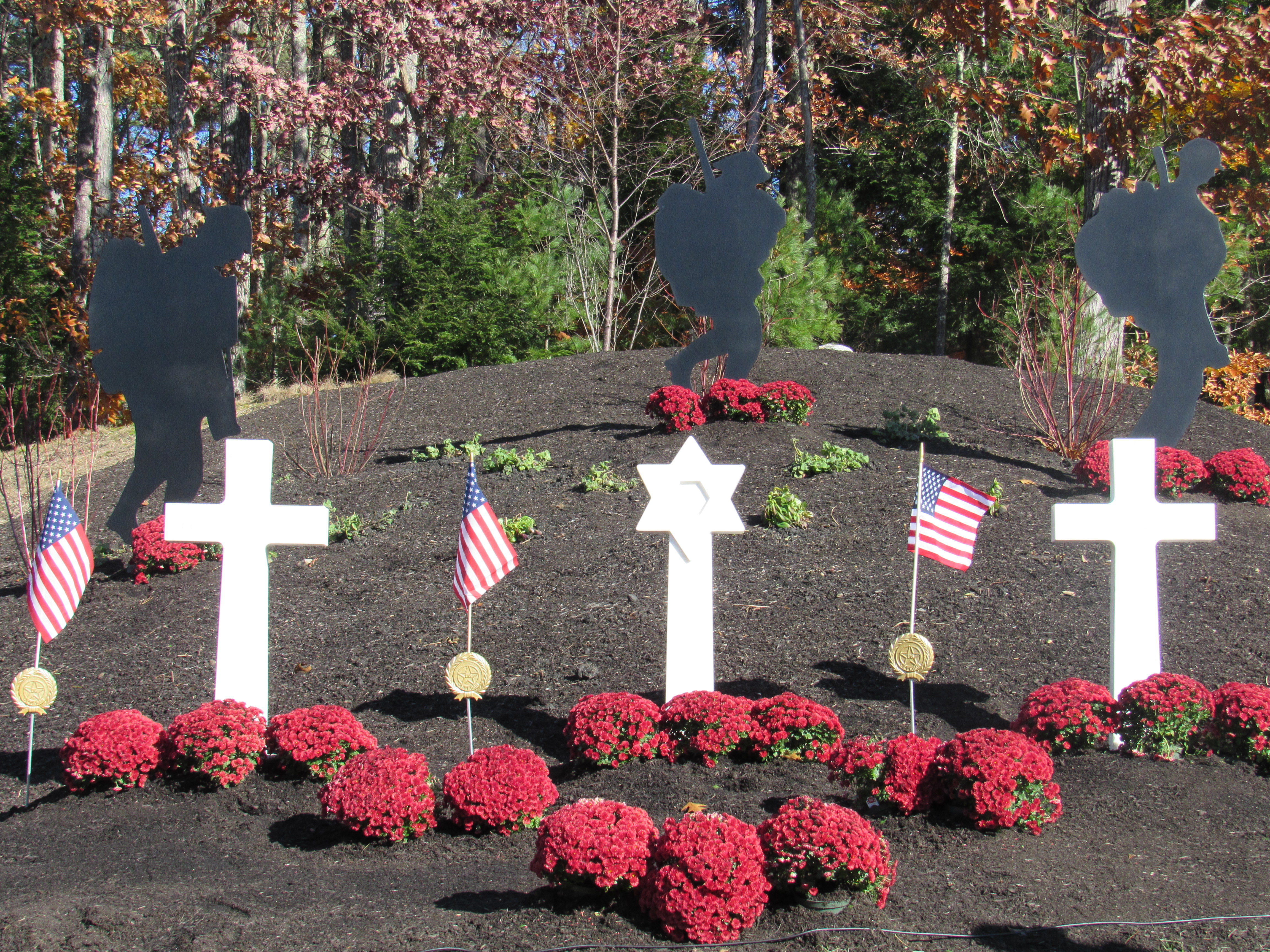 Our association has items available for you to purchase and place in the Southern Maine Veterans Cemetery. These items provide a personal way for you to honor and remember loved ones and they provide a means for our association to raise money for flowers and other items to beautify this cemetery. Prices are listed on the downloadable order forms and, with the exception of the niche vases, prices include perpetual care.